This book, edited by Yasmin Rehman, Liz Kelly and Hannana Siddiqui, was over a year in the making–a project that sought to extend the groups of minority women and the forms of violence addressed. The authors wrote about not just domestic and sexual violence, but also forced marriage, honour based violence, FGM, ritualised abuse and polygyny. Many chapters raise contentious issues and stretch understandings. For the launch at London Metropolitan University in March we wanted more than a glass of wine (in the end there was none!) – to create a space in which some of the issues and debates were aired. Purna Sen reflects on the event. 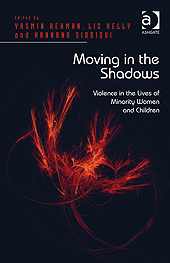 How many years has it been that Asian, African and Caribbean women, including British women, have pointed out the shortcomings in the understanding and practices of the state with respect to issues of violence? And, sadly, also in the women’s movement?

How long since the denial of access to state resources for new immigrants was criticized, since stereotypical views of minority women in refuges was pointed out, since assumptions of cultural compliance in any given group was identified as a policy problem? How long since we read books, or policy documents, and didn’t find the voices of black women, theorisations that explored non-white experiences and understandings, or that even acknowledged that white, western experience might not constitute the totality of women’s lives? I don’t know exactly but I can’t remember not hearing or making such points about silencing, blindness, discrimination, myopia or worse.

I also know, from working in many countries, that our experiences in the UK, though far from perfect, stand at some considerable distance from many others, where even to name such concerns, to criticise, is close to impossible. This is especially so the more liberal the environment, as the liberal cannot possibly have got the race or ethnicity thing wrong.

So, our history in the UK is wanting and our context needs much improvement. But this new book, and the wonderful event at which it was launched, shows both that there is space to have strong, vital debates and that the need for many voices, and changes in policy and practice, remains pressing.

I was very fortunate, and delighted, to be asked to chair the launch of this book, and I want first to note the energy, enthusiasm and power that filled the room. Many many young women, men too, babies and older people gathered for this discussion, from all sorts of backgrounds. They glistened with pride, with appetite to learn and with hope. I have been to too many events replete with misery and pessimism – but this was altogether a different affair. This is even though many of the topics, as always with conversations on violence, concerned the appalling abuse faced by women and girls on a daily basis and the paucity, or in appropriateness, of responses and protection.

Speakers addressed the increasing religiousisation of discourse on violence that demands (but will not win) a tightening grip on women’s rights and sexuality and that their noisy presence in international debates runs the risk of defining and losing our hard won gains on women’s human rights. In the UK, not only are the religiously defined debates cause for concern in themselves but so too is the reluctance of anti-racist activism to engage with ‘minority’ religions, or perhaps any religion at all. For some women, religious belonging has salience and our task might include supporting and enabling their choices too, in the pursuit of safety.

I was delighted to find my long lost colleague Comfort Momoh, in the audience. Together we shared some memories of our initial shared work on FGM, in Islington over twenty years ago. I was working with women from the Horn of Africa then and Comfort was a midwife. Women were arriving at the hospital to give birth, stitched up, and wanting to be sewn up again when they returned home. At the launch we talked of female genital mutilation and vaginoplasty and their shared outcomes – redesigning, and having surgery to produce, female genitalia to please men or secure a husband. The reality of pressure to conform to dominant constructions of female physicality and sexual being is not reflected in discourses that call one ‘choice’ and the other ‘violence’.

We heard about the recent concerns given much airing in the media, about Asian men targeting young white women and girls for sexual exploitation and how we might finds ways in which to address the facts of specific ethnic groups targeting others – whether that be Asian, white or black men, on the one hand or white or minority women on the other. We recognised that our conversations on this topic take place against the contemporary backdrop of an increasingly acceptable problematisation of immigration per se.

While this may read as a list of awfulness and doom, the launch was not a place of misery. In fact, after all these years of difficulty in talking about the relationship of race and gender, of intersectionality, the launch was for me a massively positive engagement across race and ethnicity. It was not a space where attacks were made, nor blame thrown; though there remain places where these happen – this was not one. What I was proud and honoured to be part of on 25 March was a joining of minds and hearts that together say we will talk about these issues, we know who our friends are, we will hear what is said by women who have been ill-served, and there will be neither defensiveness nor accusation.

This is a different politics to what I mentioned in the first two paragraphs. Is it a real sisterhood of what Marai Larasi called ‘difficult women’? If so, I am optimistic indeed!

Moving in the Shadows can be ordered here

In this article, Delilah Campbell asks the question: Who owns gender?