In Oxford there’s been a sustained feminist campaign against The Lodge, a ‘gentlemen’s club’ on the edge of the city centre. T&S talked to two of the organizers, Louise Livesey and Beth Penfold, about the successes, the setbacks and the lessons we can learn.

T&S: How did the campaign start, and how did you get involved?

Louise: When it first opened in Oxford, The Lodge was right in the city centre and very close to a local church. The church organized a campaign against it (which we were not involved in), and the owners moved it to what was seen as a more suitable location, the site of a defunct nightclub just outside the centre. At that point there was no organized opposition, but a few months later the law changed so that sexual entertainment venues (SEVs) had to be relicensed every year. When that came up in 2012, Oxford Feminist Network (OFN) decided to take up the issue.

Beth: At the time I was working for the Labour Party, and I raised the subject with Oxford Labour Women. I said why didn’t I approach OFN, and that’s how I got involved.

T&S: What was your objective?

Louise: The club owners were very savvy in the way they used the media; they produced press releases which the local paper just reprinted, saying they were providing employment for students and generally putting a positive spin on what they were doing. We wanted to find out what the real impact was, and if The Lodge was causing any problems.

When they opened on the new site they held an event where they invited people from other businesses that were part of the city’s night-time economy. Since they presented it as a place for ‘gentlemen’, we decided to hold a ‘gentlemen’s protest’: we went along to the club dressed as gentlemen, with moustaches—a lot of eyeliner got used that night. There were also a fair number of pipes and a good array of hats. We talked to people going in about what they thought they were supporting. 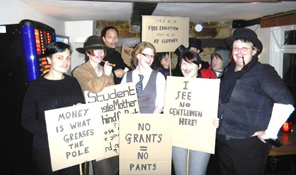 We also wanted to know how people who lived in the immediate area felt about it. The council did a consultation exercise with local residents, but it was very bad; we leafleted and canvassed to tell people it was going on and encourage them to participate. The leaflet gave them the link to the consultation website—though mysteriously it kept crashing and was very difficult to log onto.

Beth: The leaflet also included a link to a survey we designed ourselves. We knew there wasn’t going to be any value in us just making feminist arguments about the objectification of women. You need to do your research and be able to say, look there’s a nursery nearby, there’s the ice rink, there’s the further education college…

Louise: …so we asked if the presence of The Lodge put people off using other local facilities at particular times of day, and if they thought it should be sited so close to something like the ice rink or the FE college, which are full of young people under 18. We also asked if people had any personal experiences with The Lodge and its customers. We got stories about aggressive, sexualized verbal behaviour from men leaving the club—women being harassed in the street, propositioned for sex, catcalled or wolf-whistled or having explicit sexual insults shouted at them. And the sexual stuff wasn’t the only problem. There was a woman who was a childminder working in her own home, she lived just down the road from The Lodge and she would get up in the morning and find people had urinated in her front doorway. There was also an incident where a customer who was trying to evade the police broke into her garden. Other residents said they’d started getting adverts for escort services through the letterbox, which had never happened before—

Beth: —and bear in mind there had been a nightclub on the site before, so people were used to a bit of noise and drunkenness and so on. With The Lodge, though, there were different issues because of the sexual nature of the entertainment.

T&S: So you got together all this information and made a submission to the council. What happened at the license hearing?

Louise: They came with a barrister from London. I think they assumed it would be an easy ride, but as well as doing the survey we’d gone through the council’s regeneration plans for the area. Their strategy was supposed to be developing Oxford’s knowledge-based economy while preserving the city’s unique character. One of their documents said: ‘whenever new ground is broken we must build something our grandchildren will be proud of’. They also talked about being socially responsible and family friendly and inclusive. So we were able to argue that licensing a sexual entertainment venue in that part of town contradicted the council’s own policy.

Another point The Lodge’s owners made was that they were providing employment for people in Oxford. At the hearing we quizzed them about how many people they employed and what the conditions were. In fact, they only actually employed five or six people, and only three of those were local. The dancers at these clubs are defined as self-employed: they have no employment rights or benefits. Some of them had submitted letters supporting the application which included their home addresses, so we could see they weren’t from Oxford, they were coming to work from Birmingham and London and Norfolk. The Lodge also outsourced its security to a firm based outside the area. It wasn’t really contributing to the local economy.

T&S: What about the customers, were they local?

Louise: The Lodge claimed that being close to the town centre was really important for their business, but when we asked how much of their trade was walk-in, they admitted that 98% of their clientele was pre-booked parties who were coming to Oxford specifically to go to the club.

Beth: And if they’ve got no real involvement with the area that’s only going to make them less considerate to the residents.

T&S: When feminists campaign against the sex industry there’s always the argument that they’re damaging the women who work in it, stigmatizing them and stopping them from making a living. How did you address that?

Louise: We made clear that the issue for us wasn’t about the women, but the way the industry is set up and the way the club owners were operating. Another woman who worked on the campaign did try to contact women working at The Lodge, and we also asked organizations that support workers in the industry, like the GMB union and the English Collective of Prostitutes, if they’d had any contact with dancers there. They hadn’t: it was clear the women weren’t organized, maybe because they were very dispersed and not based in Oxford.

T&S: Do you know what the conditions were like for women working as dancers at The Lodge?

Louise: The Lodge’s owners also ran a club in Stratford-upon-Avon, and there was information online about the conditions at that club—the same kinds of things have been documented across the industry. Their ‘self-employed’ dancers had to pay a nightly fee to work, and about a third of what they charged for each dance went back to the club. They would also be fined if they didn’t comply with the house rules—for instance if they cancelled or were late or wore ‘inappropriate’ attire.

T&S: Object has published accounts where women talk about actually losing money—paying more to the club than they earned from the punters.

Beth:  Yes, the argument that it’s so much more lucrative than waitressing falls flat on its face. 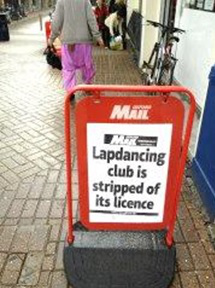 T&S: Your arguments were effective, in that the council didn’t renew the license. But that wasn’t the end of the story, was it?

Louise: No. The Lodge launched a judicial review, claiming maladministration—they said the hearing had unfairly considered parts of OFN’s submission which they hadn’t been able to see because the documents had gone missing. In fact that was false: the missing parts of our submission had been excluded. So they lost the review. They were given six weeks to wrap up the business, but they chose to close it that night, apparently without warning the workers, who were effectively locked out. They spun it to the media that they’d been forced to close with no notice, which wasn’t the case at all.

Then they went for a High Court review of the licensing law itself. Stringfellows was on the docket too, because they’d also recently had a licensing decision go against them. It was a test case for the industry, and the documents were filed by a law firm which has represented the Lap Dancing Association. Starting a new set of legal proceedings allowed The Lodge to reopen pending the court decision, but in February they lost that case as well.

T&S: In principle the High Court decision was positive—the industry didn’t get what it wanted and the council’s decision stood—but in the end it didn’t stop The Lodge from reopening. How did they get round their license problem?

Louise: By rebranding the establishment as a ‘burlesque club’. Essentially it’s the same business, and on the website all they’ve done is a basic ‘search and replace’ job so that ‘gentleman’s club’ becomes ‘burlesque club’. The difference is the level of nudity that’s permitted—the dancers in a burlesque club have to keep their pants on—but that takes them out of the SEV category, so they only need a ‘normal’ club license.

Apparently they are offering ‘private burlesque dances’ in booths, which doesn’t sound like burlesque as that’s usually understood. The council has said it will review the CCTV regularly to make sure they’re complying with the terms of their license. But beyond that there’s not much they can do, since they don’t have the same powers as they did when it was a ‘gentlemen’s club’. The rebranding has set a precedent for other clubs to follow if they lose their SEV licenses—

Beth: It’s depressing that we couldn’t fight it on opposition to the objectification of women. After all the work we did and the success we had, that’s still going on and men are still profiting from it.

Louise: The case became all about the council and the club, and all about bureaucratic details—

T&S: What do you think other feminists can learn from this campaign?

Louise: Read council strategy documents! Do the boring, diligent stuff. Our strategy wouldn’t work everywhere, it depends where a club is sited: in York a similar campaign got blocked because the club was in a street full of other night businesses. But if you can argue that giving a sex club a license contradicts a council’s own policy that does give you some leverage.

Beth: It’s a bit like getting Al Capone for tax dodging. But it’s worth it to be a piece of grit in their eye. 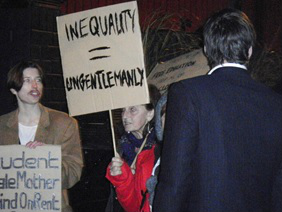