Delilah Campbell thinks that Julie and Julia offers feminists food for thought in her review.

Celia Jenkins and Ruth Swirsky review the 2009 Clean Break production it felt empty when the heart went at first but it is alright now. 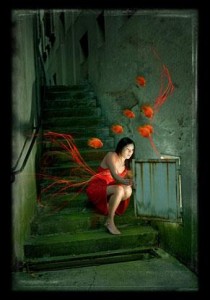 Clean Break’s new production is a complex unfolding of the hopes and struggles of an ‘accidental’ prostitute, whose story is both particular and echoes the narratives of so many more women who have been trafficked or forced into prostitution.

It is gruelling and funny, with sharp writing by Lucy Kirkwood, and brilliant staging. Dijana is a hopeful, exuberant young woman from Eastern Europe who, through happenstance and romantic dreams, is groomed into prostitution by her boyfriend. She knows her worth: 1,000 euros (‘like two and a half i-phones in easy language’) even though she has to ‘pay back’ £20,000 to regain her passport. The theme is familiar; the writing, staging and performance are absolutely fresh. Dijana is tough with a wry sense of humour, vulnerable and damaged by cruel circumstances but not a hapless ‘victim’.

The audience is led through a series of rooms: each act is discrete and brilliantly staged, at one point almost verging on performance art. The first act, in her working room, is shocking, in-your-face, production-line sex for money. We follow Dijana through several rooms where the grim story unfolds, backwards and forwards across time. The sets are magical, the acting excellent, the production is first-rate. The use of physical space at the Arcola Theatre places the audience right in Dijana’s personal space, making you complicit in her experience. The play deserves a much wider audience; hopefully it will both return to the Arcola Theatre after its 3 week run, and travel through the UK.